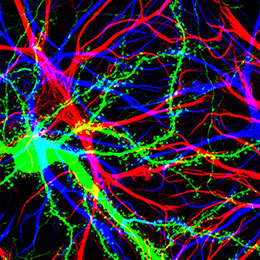 Many people with multiple sclerosis (MS) use complementary health approaches to help reduce relapses or relieve symptoms, such as pain, muscle spasticity, fatigue, cognition and depression. Some mind and body practices, such as yoga, may help ease some symptoms of MS, but there is currently no definitive evidence to suggest that any dietary supplement is effective to reduce relapses or symptoms of MS.

The American Academy of Neurology issued evidence-based guidelines in 2014 on complementary and alternative medicine use for MS and concluded that evidence was available to develop practice recommendations for use of cannabinoids, ginkgo biloba, low-fat diet with omega-3 supplementation, magnet therapy, reflexology, and bee venom therapy. This issue of the digest provides the state of the evidence for these and other commonly used complementary health approaches for MS.

What the Science Says:
Multiple Sclerosis and Complementary Health Approaches

There is some limited evidence suggesting beneficial short-term effects of yoga on fatigue and mood in people with MS, but scientific studies overall had a high risk of bias and definitive conclusions could not be drawn.

Read more about the research on yoga for MS

There is insufficient evidence to support the use of reflexology for most symptoms of MS, including pain, health-related quality of life, disability, spasticity, fatigue, depression, and others. However, 2014 evidence-based guidelines from the American Academy of Neurology concluded that, based on four studies, reflexology is possibly effective for reducing MS-associated paresthesia over 11 weeks.

Read more about the research on reflexology for MS

Read more about the research on magnet therapy for MS

Read more about the research on hyperbaric oxygen therapy for MS

Orally administered cannabinoids (cannabis extract, synthetic THC), mucosally delivered cannabinoids (cannabis THC and CBD extract oral spray, nabiximols (trade name Sativex), and smoked cannabis have all been studied for therapeutic effects in MS. Based on available evidence, cannabinoids may relieve spasticity and/or pain in people with MS; however, no marijuana-derived medications are approved by the U.S. Food and Drug Administration to treat MS. Sativex has received regulatory approval in more than 25 countries outside the United States for the treatment of spasticity (muscle stiffness/spasm) due to MS. There are insufficient data to determine if smoking marijuana ameliorates symptoms of MS. Additionally, the psychoactive properties and other potential adverse effects need to be considered. Sativex is licensed in the UK for use as an add-on treatment for MS-related spasticity when people have shown inadequate response to other symptomatic treatments or found their side effects intolerable.

Read more about the research on cannabinoids for MS

Read more about the research on ginkgo biloba for MS

There is insufficient data to assess any real beneficial effects of omega-3 fatty acid supplementation on MS.

2014 evidence-based guidelines from the American Academy of Neurology concluded that a low-fat diet with fish oil supplementation is probably ineffective for reducing MS-related relapse, disability, or MRI lesions, or for improving fatigue or quality of life.

To date, results of studies have been conflicting, as to whether vitamin D may provide a therapeutic benefit for people with MS. A 2018 Cochrane review found very low-quality evidence suggesting no benefit of vitamin D for patient-improving outcomes among people with MS. However, findings from a 2018 meta-analysis suggest that vitamin D supplementation may have a therapeutic role in the treatment of MS. Further high-quality studies are needed before definitive conclusions can be drawn.

Read more about the research on vitamin D for MS

Based on a few small studies, bee venom therapy seems to have no effect on either MS symptoms or disease progression. There are serious side effects associated with bee venom, including risk of anaphylactic reactions and death, which could limit any efficacy of bee venom therapy for the treatment of MS.

Read more about the research on bee venom for MS