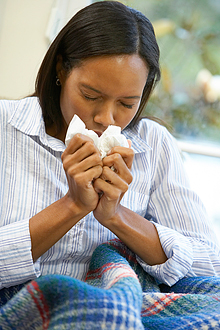 Self-rating health may predict a healthy person’s susceptibility to the common cold. Results of a new study found that those who self-rated their health below the top-level of “excellent” were associated with poorer immune system competence. The study, funded in part by the National Center for Complementary and Integrative Health, was published in the journal Psychosomatic Medicine.

Researchers from Carnegie Mellon University and the University of Pittsburgh School of Medicine analyzed data from 360 healthy adults aged 18?55 years with a mean age of 33 years. Participants completed a questionnaire assessing health as excellent, very good, good, fair, or poor, and were subsequently exposed to a common cold virus. They were monitored for 5 days for signs of illness. None of the participants rated their health as poor, and only 2 percent chose a “fair” rating. Approximately one-third of participants developed a cold following exposure.

The researchers found that the risk of developing a cold more than doubled for those who rated their health as anything other than “excellent.” Poorer self-rated health was associated with regular smoking, heavy drinking, less exercise, poor sleep, and a greater body mass index. Poorer self-rated health also correlated with poorer health practices, increased stress, fewer positive emotions, and other socio-emotional factors. However, none of those behaviors or socio-emotional factors could account for why those with better self-rated health were resistant to developing a cold.

The connection between poorer self-rated health and susceptibility to infection, the researchers noted, may be tied to premorbid indicators (i.e., sensations or feelings) of immune system dysfunction that tell a person when something is wrong. The researchers also suggested that clinicians might integrate use of self-rated health with more traditional indicators of disease risk to help detect potential underlying disease susceptibility, especially related to immune system function.

Flu and Colds: In Depth